How to supplement this winter Farmers Weekly - By Glenneis Kriel 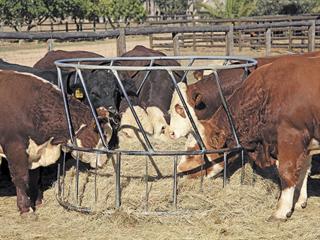 Supplying animals with more food that is ingested over a longer period, rather than providing several small portions every day, helps to ensure that weak animals get access to feed rations.
Photo: Glenneis Kriel

In preparation for winter, most farmers in summer rainfall areas are supplementing their livestock feed. However, agricultural researcher, Jan Hoon, explains that normal winterfeed supplementation is not enough for animals in drought-stricken areas.

With drought conditions still prevailing in many parts of the summer rainfall region, farmers will have to adjust their winter feeding strategies to compensate for nutritional losses. This is according to Jan Hoon, agricultural researcher at Grootfontein Agricultural Development Institute.

Climatic conditions and pasture types vary greatly between regions, making a ‘one size fits all’ feeding strategy impossible, Hoon stresses. Nonetheless, there is a single important factor that should be borne in mind this season: supplementary winterfeed is aimed only at addressing nutritional shortages in pastures and veld, and should not be considered a substitute for these.

Feed supplementation is the provision of small volumes of concentrated feed stuff lacking in pastures or veld. “When done correctly, supplementary feeding will result in animals receiving a more balanced diet, which, in turn, helps to increase feed intake from veld or pastures. The ultimate result is better animal performance in terms of feed utilisation,” Hoon explains.

Feeding strategy
This year, survival is the main priority for farmers in drought-stricken areas, and it is best to downscale production by culling inferior animals.

“You need to be in a position where you are able to supply the dietary needs of all your animals. It’s better to keep a smaller number of your best animals than to neglect all of them,” Hoon says. The drought feeding plan should be initiated before animals have lost more than 15% of their body weight, or before starvation begins to disturb the animals’ digestive processes or causes them to become too weak.

“It can take two to three weeks for the rumen’s microflora to adapt to new rations, especially if the rations primarily consist of grains. New rations should therefore be introduced slowly and over a couple of weeks. If animals are allowed to lose weight slowly and systematically, they will be able to stay healthy on survival diets during droughts at 66% of their normal, mature bodyweight,” Hoon explains.

The amount of feed given depends on the quantity and quality of available food sources. “If there is no grazing available, research has shown that beef cows with an initial body weight of 440kg can be kept on a 3,6kg concentrate-rich daily diet for eight months, with a weight loss of only 63kg.

This converts to a total digestible nutrient [TDN] intake of 2,65kg/day. Sheep, on the other hand, need a total TDN of 265g when concentrate-rich diets are supplied, and 365g in the case of roughages like lucerne,” says Hoon.

Keeping animals in smaller camps will prevent them from exerting energy in the search for food, and will protect the veld from overgrazing. It has the added benefit of reducing labour and transport costs.

“Group weak and strong animals separately, and ensure that there’s enough space at the feeding troughs so that all the animals get access to feed. Weaker animals usually struggle to compete with the stronger animals for food,” says Hoon.

Feeding intervals are dependent on the animal and feed types. However, it is generally better to supply animals with more food that is ingested over a longer period, than to provide several small portions every day. This also helps to ensure that weak animals get access to the rations. Animals should receive feed two to three times a week.

Hoon points out that farmers generally tend to stop the feeding regime too soon after a drought has broken. This has a negative impact on the veld and the animals.

“Young green pastures have lots of proteins and minerals, but are energy-deficient, which can lead to a drop in the body mass of drought-stricken animals and even livestock losses. To prevent such losses, it’s best to continue the drought rations for at least two to three weeks after the rains,” Hoon advises.

Normal conditions
Under normal conditions, supplements are usually given to animals to address nutritional deficiencies in pastures or veld.
The type and volume of additional feed required will depend on the quality and quantity of the available graze, the age and weight of reproducing and young animals, the stage of pregnancy or lactation, the pregnancy and lactation status (single or twin animals), and the cost of available supplements.

Protein supplements stimulate the rumen’s microbial population, which increases its digestibility potential and voluntary feed intake. Especially suited for grassland areas, these supplements occur naturally in the form of lupines, fish meal, soya/cotton/sunflower cake meal, or as NPN (non-protein nitrogen) in the form of urea, or as a combination of the two.

Excessive amounts of urea, however, could be toxic, and Hoon advises that sheep not receive more than 15g/animal/day. Cattle, he says, should not receive more than 100g/animal/day. High levels of urea should also not be given during drought conditions, as animals tend to lose their ability to digest this source of protein when subjected to feed scarcity. Before animals are supplied with a urea lick, their salt demands must first be addressed.

These are usually associated with shrubveld (bossieveld). All grains and their derivatives can be seen as sources of additional energy, with maize and molasses most commonly used.

Hoon warns that the high intake of energy supplements could have a negative effect on fibre-digesting organisms in the rumen, which could lead to reduced feed intake. In grassland regions, it is therefore important to first ensure that the protein demand of the animal is met, before energy supplements are given.

Hoon says that a farm is seldom short of only one nutrient. As such, most farmers must combine different supplements or licks to provide their animals with balanced feed. Since feed ingredients can be expensive, it makes sense to give only the most suitable supplements and to supply them in the right way, at the right volumes, and at the right time. A feed expert can help determine a farm’s nutrient shortages, and advise the farmer on how to correct these imbalances.