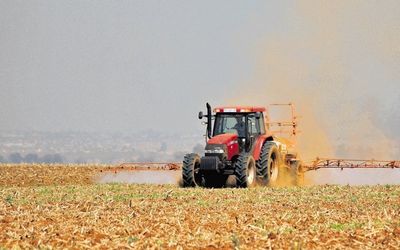 SOUTH Africans in the entire food value chain have borne the brunt of the El Niño-induced drought. However, grain producers must think beyond this ephemeral crisis and its associated high grain prices.

Weather models are already indicating a gradual decay of the El Niño weather pattern and it could be over in the next four months.

Last month, the Australian Board of Meteorology noted there is a 50% chance that the El Niño phenomenon could transition into a La Niña by the end of the year.

A La Niña would bring much-needed rainfall to the country.

The good news for grain farmers is that the demand for starchy staples (maize and wheat) is by nature inelastic (demand does not change much with prices), hence demand can be expected to remain good in the long term.

The cyclicality of grain prices is not unique to SA. In the 2012-13 production season, the US experienced a severe drought that led to a 13% year-on-year decrease in their maize production to 273-million tonnes, according to International Grains Council statistics.

In response to the reduced production, US maize prices traded above $300 a tonne, $110 a tonne higher than current US prices.

In response to those higher prices, farmers in the US increased maize production in the succeeding season, with total maize production reaching 354-million tonnes — a 30% year-on-year increase.

Subsequently, maize prices fell to about $200 a tonne due to oversupply, which affected ill-prepared farmers negatively. Fortunately, the effect of such price fluctuations is cushioned by government subsidies in the US and they can still afford to produce high maize volumes.

This is a luxury South African maize farmers do not enjoy.

Maize prices reacted to these production dynamics, reaching more than R5,000 for a tonne of white maize at the beginning of the year.

This was 157% higher year on year, and prices have generally maintained this level, which is expected to entice farmers who survive the drought to produce more.

However, it is important to remind farmers that the current maize prices are abnormally high and at some point, they will return to normal levels of about R2,500 a tonne. This is a situation farmers will need to manage well, as it will affect their profitability.

As we approach the 2016-17 production season, farmers will need to plan their marketing strategies to reduce their exposure to price risk.

The current weather-related risks have already been priced in on the market, meaning there shouldn’t be any significant spikes in maize prices, except the day-to-day changes that relate to currency.

Going forward, farmers will need to improve how they monitor weather models and carefully plan the next season’s buying, production and marketing strategies to minimise risks and maximise profitability.

Several marketing options that enable farmers to lock in the price of their produce are available, and farmers need to familiarise themselves with them and exploit them to their advantage.

Overproduction in the next season is a real possibility, and all actors along the value chain need to be well-prepared for the possible implications of those supply-change dynamics. Careful monitoring and planning for weather-related developments might set one on a successful path for the 2016-17 season.

• Sihlobo is former Grain SA economist. He currently leads agri-economics research at the Agribusiness Chamber (Agbiz). He writes in his own capacity