Farmers have their ‘backs to the wall’ BDLive - BY BEKEZELA PHAKATHI 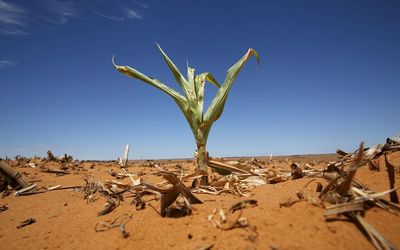 THOUSANDS of drought-stricken commercial farmers are considering selling their farms as they struggle to access funding to sustain their operations.

SA has been hit by successive droughts in the past three years. This year’s drought is the worst since 1992.

According to AgriSA, an organisation that represents commercial farmers, approximately 15,000 out of the 35,000 commercial farmers in the country “have their backs to the wall”, mostly because of the devastating drought.

The organisation called for immediate intervention from the government and banks until farmers could generate profits.

“We are concerned about the fact that more and more big commercial farmers now have their backs to the wall … they do not have the cash flow to support their operations any longer,” AgriSA deputy CE Christo van der Reede said on Tuesday. Agri SA had fielded hundreds of phone calls this week from farmers in dire straits.

But Van der Reede said it was just a drop in the ocean compared to what farmers needed to remain viable. The only way out for most of the affected farmers was for the government to make available subsidies to pay farm workers and to provide bank guarantees, which would allow farmers to continue borrowing from lending institutions, Van der Reede said.

READ THIS: Farming needs a plan to weather storm

“Remember, many of these commercial farmers have had three droughts in a row … they took out big loans in previous years, and owe banks a lot of money. Because the drought situation has not improved, the farmers are unable to pay back the loans and, therefore, cannot access more loans from these banks,” said Van der Reede.

The farmers’ collective debt from the previous farming season stands at R125bn.

It was in nobody’s interest to see farmers shutting down their operations, said Van der Reede.

“This will lead to massive job losses and will have enormous implications on food security. We also want to see more black farmers emerge, but if these farmers close shop, who will mentor them?”

The Department of Water and Sanitation said it would take SA two to three years to recover from the drought. The government was continuing with interventions in regions declared drought disaster areas, department spokesman Mlimandlela Ndamase said.

Wandile Sihlobo, head economist at the Agricultural Business Chamber, said grain prices were likely to remain high for the rest of 2016. The price of maize was 50% higher than it was in 2015.

According to economist André Roux, struggling farmers could consider diversification.

“Tourism remains an underutilised source of wealth for the country… There is the ocean economy, ecotourism, nature reserves.”