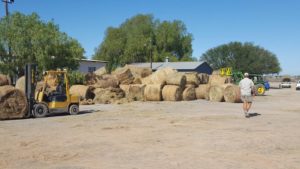 A convoy of trucks is currently delivering half-a-million rands’ worth of feed to farmers in the drought-stricken Western Cape, a gesture which will help to keep livestock alive and bring hope to farming communities.

Agri SA Deputy Executive Director Christo van der Rheede told Farmer’s Weekly this morning (7 November 2017) that the convoy was on its way to farmers in Beaufort West and Sutherland.

He said it was intended for any farmer in need. Distribution was to be managed by organised agriculture structures on the ground.

He said the convoy was intended to send out a strong message: “People must realise farmers are experiencing serious difficulties,” and that the crippling drought was not over, despite some rain.

He explained that if farmers suffered, this would ultimately impact food supply and security.

He said the convoy was not about helping farmers alone, but for the ultimate benefit of all South Africans.