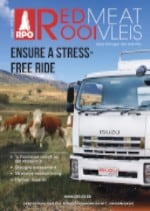 The  digital version of the Red Meat/Rooivleis magazine available on www.agriconnect.co.za

The Namibian Department of Agriculture, Water and Forestry suspended the existing veterinary import permits (VIP) in respect of the import of live cattle, beef (excluding deboned beef) and intestines.
This follows after the world organisation for animal health, the OIE, recognised Namibia as a country with negligible risk for Bovine Spongiform Encephalopathy (BSE), commonly known as mad cow disease, which means that changes in the approved VIP’s are required to provide the level of protection commensurate with the status so obtained.  Read more …

The Red Meat Industry Forum (RMIF) commended the Department of Agriculture, Forestry and Fisheries on publishing the poultry meat regulation amendment in the Government Gazette.

Herds in the Free State are smaller

The consequence of the drought is that stock herds in the Free State has already deminished with 20% at the end of January 2016, said Neels de Villiers in his chairman’s report at the Free State RPO congress.
This is according to a survey made by the Department of Agricultural economics at the University of the Free State, as requested and financed by the RPO. Further reductions occurred due to the coming winter because stock producers did not have enough feed and grazing for their animals. In certain parts, herds have already been diminished with 40 to 50%.  Read more …

The President of the South African Brahman Breeders’ Association recently attended the Brahman world congress in Australia.
His impressions of the Australian Brahman industry include the following:

May has been hot

May had been hotter than usual and in many places no frost had been encountered, according to the monthly disease reports as informally reported by veterinarians.
With late rains that fell in some areas the result was that internal and external parasite infestations were rife. Reports of tick and insect borne diseases were received from many parts of the country. The months ahead of us is going to be a big challenge for farmers due to lack of roughage for animals. Hopefully the rains will come early in spring.  Read more …

Do we understand bush encroachment?
For three or more decades we have accepted that the major causes of bush encroachment are overgrazing and fire. Apart from recent long term studies in several biomes which have begun to challenge this dogma, logic and observations also support the challenge: (1) Bush encroachment occurs in many arid regions where fuel loads are insufficient for fires to be an important causal factor. (2) Bush encroachment is also widespread in areas where grazing is infrequent and light. Therefore, I have decided to review the results and to that effect have summarized the interpretations by the authors referenced below.  Read more …

Ms Jolandie Botha is a masters’ student at the University of Pretoria and requires farmer’s help with the completion of questionnaires on the use of animals to protect stock.

Please click on the following link to complete the questionnaire:

Drought makes it difficult for stock farmers
By Fredalette Uys

The worst drought in South African history has a significant impact on red meat producers throughout the whole country, according to a study by the University of the Free State’s unit for livestock-economy on request of the RPO.
The study has been undertaken to make institutional role players aware of the impact of the drought on farmers. Read more …

According to Onderstepoort Biological Products the following products against diseases of severe economic impact are currently available:

Except for the Brucella vaccine, all products have been available since the beginning of 2016. South African farmers have a choice to use either OBP’s Brucella S19 or RB51 from MSD against Brucellosis.

Various instances of snotsiekte occurred recently in the country, especially in the Rustenburg/Swartruggens- area.
The only viable scientific solution to the problem still seems to be a vaccine. AfriVet has, according to Dr Peter Oberem, tested the vaccine from Scotland in South Africa. A presentation will soon be made to the Department of Agriculture, Forestry and Fisheries in order to register the vaccine.

Drought has an impact on management

Biggest debate is on land issues

On the broader scope, the issue of land is currently the single biggest debate in agriculture, said James Faber in his chairman’s report at the Northern Cape RPO-congress.
Land ceilings and the distribution of 50/50 of land have an impact on every property owner. Therefore, the District Land Reform Committees have been instigated. The Northern Cape RPO is represented in the various committees and it is of utmost importance that the RPO also participates.  Read more …

New lamb cuts have been developed in Australia in an effort to address consumer resistance against the high prices of heavier cuts.
The findings from research conducted by the Australian sheep industry co-operative research centre in collaboration with Meat & Livestock Australia (MLA) and the New South Wales department of primary industries are aimed to adapt lamb cuts to the current consumer. It will be released at LambEx 2016.  Read more …

Albury, New South Wales, has been chosen as the city to host Australia’s premier lamb industry event, LambEx 2016, from 10 to 12 August 2016.
A regional hub, Albury is the perfect choice to host the fourth LambEx, with its location, facilities and community support ensuring the event will be a great success.
LambEx attracts more than 900 delegates and 70 exhibitors and is a great opportunity to promote New South Wales’ world-class lamb industry. All sectors of the lamb industry have come together to build on the event’s previous success and ensure the Australian sheep and lamb industry continues its proud tradition of showcasing its industry.
http://www.lambex.com.au/

Brangus train on a wide scale

The Brangus Breeding Association undertook an extended training campaign when stockman courses for cattle farmers and emerging farmers were countrywide presented.
The Mpumalanga Brangus Club presented two very successful days at the Nooitgedacht Research Centre near Ermelo on 28 and 29 April 2016. On 28 April, Koos Dafel addressed the 162 emerging farmers who attended the day. His theme was the importance of cooperation between farmers. On 29 April, more than 200 school children from Mpumalanga were trained. Both days were concluded with a practical session in the kraal by club members.

Internationally, beef prices remain stable due to good grilling season demand out of the US and restricted supply out of Australia and New Zealand. Locally, prices are expected to remain bearish in line with seasonality. Stewing cuts are however popular during this cold conditions, according to ABSA Agri Trends.
International
During the week of 21 June 2016 New Zealand steers moved sideways at NZ$514 and cows were the same at NZ$383 per head respectively compared to the previous week. In the US, beef prices for the week were mixed as follows: Top side was 2.87% lower at $201,52cwt, Rump was 2.49% lower at $285,32/cwt and Strip loin was 3.18% lower at $603.83/cwt, Chuck traded 1.89% higher at $203,30/cwt, Brisket traded 6.48% higher at $277,68/cwt. The carcass US equivalent was 0.57% higher at $307,60/cwt.  Read more …

Internationally, improved demand due to Ramadan and a combination of tighter supplies in both New Zealand and Australia due to lower sheep flock will continue to support sheep meat prices, according to ABSA Agri Trends.
Locally, the seasonal reduction in demand during the winter months might also add pressure to short term prices, as colder temperatures don’t support outdoor grilling.  Read more …

News about your lamb chop: