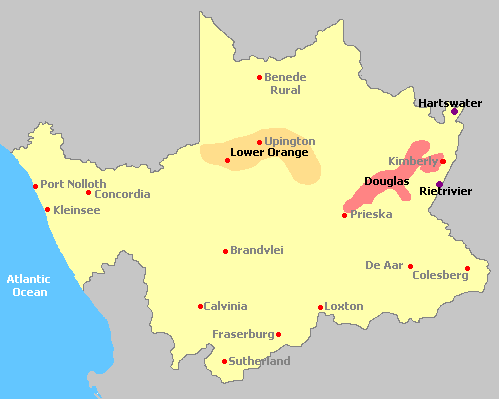 The vast and arid Northern Cape is South Africa’s largest province – around the size of Germany – and takes up nearly a third of the country’s land area. Yet it has the smallest population, only 1-million people, and a population density of just three people for every square kilometre.

Along the province’s northern border with Namibia runs the great Orange River, which feeds the Northern Cape’s agriculture and alluvial diamonds industries. The Molopo River is at the border with Botsw

ana to the northeast, while the cold Atlantic Ocean forms its western boundary.

The Northern Cape landscape is characterised by vast arid plains with outcroppings of haphazard rock piles.

The capital is Kimberley, abutting the Free State province to the east.

Other important towns are:

The Northern Cape is home to the world’s largest telescope, the Square Kilometre Array (SKA), the greatest portion of which is currently being built at Carnarvon. Sutherland is the site of the southern hemisphere’s largest astronomical observatory, the multinational-sponsored Southern African Large Telescope, or SALT.