South Africa: Agri SA on the 2018 Budget Speech of the Minister of Finance CNBC Africa 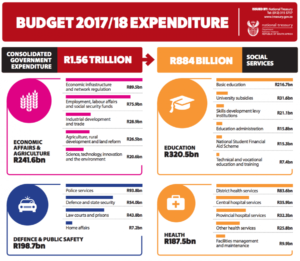 The 2018 national budget was tabled under very difficult economic circumstances. The Minister of Finance acknowledged that difficulty, but necessary trade-offs had to be made to formulate a budget that moderates spending, raises revenues whilst aiming to minimize the potential negative effect on growth.

From an agricultural perspective, Agri SA is particularly pleased that the Minister took time to acknowledge agriculture’s contribution to the country’s economic growth, says Dan Kriek, president of Agri SA.

Unfortunately, once again agriculture received relatively little further attention in this budget as it did in the medium-term budget policy statement (MTBPS) of October last year. This is despite the claims made by the minister that government remains committed to the goals set in the Constitution and the National Development Plan (NDP).